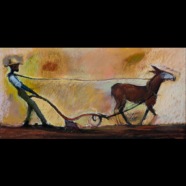 Posted by GRABSKI on January 3, 2016 in Short Story | Leave a comment

The year 1927 ushered in the greatest flood on record in Mississippi—a year that 12-year-old Avery would look back on as the year that most shaped his life. But it was the year leading up to the flood that was hardest on him, beginning with six months of retribution, owing to his attempt to run away. The torrid days of endless hours and humid southern nights dragged on like the turning of a gristmill, each starting where the other left off, one revolution same as the…

Thanks to Animal, ‘A Beast of a Literary Magazine’ editors, Danita Berg and Garrett Riggs for publishing, ‘Clegg’s Nickel Mule’.